MISSOURI JOINS THE LEGALIZATION OF RECREATIONAL MARIJUANA USE TREND

On November 8, 2022, Missourians joined the legalization of marijuana trend seen across the nation. A majority voted in favor of ballot measure Amendment 3, which amends the Missouri Constitution to:

While legal sales of recreational marijuana are not expected to begin for several months, the provisions of Amendment 3 technically came into effect on December 28, 2022.  Naturally, many Missouri employers are curious about how Amendment 3 impacts their operations and current policies, including in the context of employment decisions, and in workers’ compensation.

Notably, Amendment 3 does not alter an employer’s ability to prohibit marijuana use as part of its drug-free workplace policy in certain scenarios.  For example, employers in Missouri still can refuse to hire, discharge, discipline, or take an adverse employment action against a person because that person was working while under the influence of recreational marijuana.  However, Amendment 3 now prevents an employer from discriminating against a person in hiring, termination, or penalizing a person if they test positive for marijuana but have valid documentation establishing a prescription for medical marijuana, so long as the positive test was due to lawful consumption off the employer’s premises and not during work.

In terms of workers’ compensation, the Missouri Workers’ Compensation Law does provide for penalties in the event an employee tests positive for drugs at the time of a work-related injury.  Specifically, Section 287.120.6 RSMo states:

Even as recreational marijuana use becomes legal in Missouri, the Missouri legislature manifested an intent to penalize workers’ compensation benefits in the event a workplace accident is sustained in conjunction with or as a result of the use of intoxicating substances (whether or not they are legal), as evidenced by the inclusion of alcohol in Section 287.120.6 RSMo.  Amendment 3 also does not alter an employer’s ability to test employees for marijuana use following a workplace accident.  Additionally, Section 287.120.6(4) RSMo provides for a rebuttable presumption that the workplace injury was sustained in conjunction with the use of a tested nonprescribed controlled drug if:

From a practical standpoint, because marijuana metabolites can persist in an individual’s system after the intoxicating effects of marijuana have ended, sustaining a drug penalty for marijuana use is often difficult.  Therefore, it is a stronger case if an employer can provide additional evidence of impairment at the time of a workplace injury (such as witness testimony of apparent intoxication) in conjunction with a positive drug test.

In light of the legalization of recreational marijuana in Missouri, employers should make sure drug testing policies comply with the new law, ensure supervisors are trained and capable of identifying impairment signs and procedures, and must clearly communicate any new drug policy changes to employees.  If you have any questions on this law and the potential impact on your business, please contact any attorney at Wiedner and McAuliffe by email or phone at 312-855-1105. 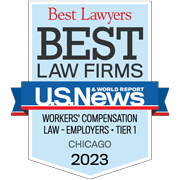